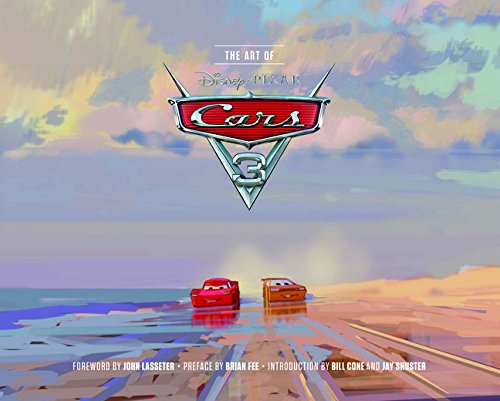 Pixar Animation Studios presents The Art of Cars 3, a behind-the-scenes look at the concept art from the latest film in the popular Cars series. Fascinating storyboards, full-color pastels, digital paintings, and more offer a unique perspective into the beloved world of Lightning McQueen and his friends, new and old. With a preface by John Lasseter, foreword by director Brian Fee, and an introduction by production designers Bill Cone and Jay Shuster, The Art of Cars 3 is a scenic road trip through a masterfully animated film.

Review
"We enjoyed the book cover-to-cover and cannot recommend it enough. Between the great storyboard insights from Scott Morse (described in our video review) to the early concept artwork from the original version of the film...the book provides Cars fans a great background into the hard work and creation of the movie." --
-Pixar Post

"This book shows the sheer attention to detail poured into this movie, and members of the production team tell of how how their research and sketches evolved and changed to make this an exhilarating adventure worthy of old and new generations of Car lovers. 9 out of 10 stars" --
-Starburst magazine

"This wonderful book details the incredible amount of work that goes into making films such as Cars - the illustrations are brilliant, the technical details superb." Books Monthly blog

""With such a rich variety of visual material on display, including deleted and unused material, there's no need to pad the book out with film stills: hurrah! Plus there are full artist credits for every image used: double hurrah! Rating: 5 stars out of 5" ImagineFX

"If you are into cars, racing, this franchise, or if you are really interested in filmmaking, you'll definitely enjoy this book. [...] I definitely enjoyed reading this book, there's tons of great stuff in it, and it s a wonderful companion to Cars 3." --Rotoscopers